JOHANNESBURG (Reuters) - South Africa's ruling African National Congress will further discipline top official Ace Magashule if he does not apologise for trying to retaliate against President Cyril Ramaphosa for his suspension, the president said on Monday.

Magashule, one of Ramaphosa's main ANC rivals, is currently suspended as secretary-general of the party over corruption charges. In a letter last week, Magashule tried to retaliate by suspending Ramaphosa, claiming he had the authority to do so as secretary-general. His attempt failed.

The public spat has exposed a bitter power struggle in the party of liberation hero Nelson Mandela, ahead of a leadership contest next year in which Ramaphosa is expected to seek re-election.

Magashule is the most high-profile politician to be charged with corruption since former president Jacob Zuma, who is awaiting trial over an arms deal.

Ramaphosa has staked his reputation on cleaning up the ANC's image and cracking down on corruption, but his opponents accuse him of using the crackdown to sideline them.

Ramaphosa told the ANC's national executive on Monday that Magashule had no mandate to suspend him. He said Magashule's deputy Jessie Duarte would act as secretary-general, a powerful post in charge of the day-to-day running of the ANC, while Magashule was away from his post.

Magashule has yet to respond to the comments. A close aide said he would not apologise because he believes what he did was legally correct. In an interview with the public broadcaster on Friday, Magashule called the corruption charges against him flimsy and said he was being treated unfairly.

Magashule was suspended in line with tougher rules for ANC members charged with corruption and other serious crimes, agreed by the party's executive in late March.

Ramaphosa said Magashule had to apologise publicly "within a set timeframe" or face "disciplinary procedures" in line with ANC rules. He did not say what additional punishment Magashule might face. 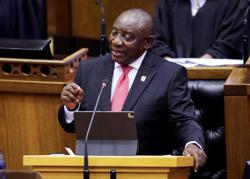 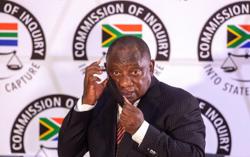