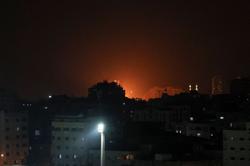 A Palestinian man gestures as he inspects a damaged building following an Israeli air strike, amid a flare-up of Israeli-Palestinian violence, in Gaza City May 11,2021. REUTERS/Mohammed Salem

CAIRO (Reuters): The Arab League on Tuesday condemned deadly Israeli air strikes on the Gaza Strip and called on the international community to move urgently to stop escalating violence that it blamed on Israeli actions against Palestinians in Jerusalem.

The violence began with confrontations between Palestinian protesters and Israeli security forces at al Aqsa Mosque, a compound known to Muslims as the Noble Sanctuary and to Jews as Temple Mount, in the heart of Jerusalem's walled Old City.

Israel carried out air strikes on Gaza, killing at least 28 people, after Palestinian fighters based there unleashed barrages of rockets, some close to Jerusalem. Two people have been killed in Israel from rocket fire.

In a statement before the Arab League's meeting, its chairman Ahmed Aboul Gheit said: "Israeli violations in Jerusalem, and the government's tolerance of Jewish extremists hostile to Palestinians and Arabs, is what led to the ignition of the situation in this dangerous way."

The holy city has been tense during the Muslim fasting month of Ramadan, with sporadic unrest and the possibility of evictions of Palestinians from homes in East Jerusalem claimed by Jewish settlers in a court case adding fuel to the friction.

In a statement concluding their meeting, Arab League foreign ministers said they held Israel "fully responsible for whatever follows due to its crimes, which constitute glaring violations of U.N. decrees, international law and human rights law."

It called on international organizations including the U.N. Security Council to "immediately stop the Israeli aggression and provide the necessary protection for the Palestinian people and uphold their right to worship freely and safely".

The United Nations is working urgently to defuse tensions between Israel and the Palestinians, a U.N. spokesman said. U.N. Secretary-General Antonio Guterres, he said, was saddened by the increasing numbers of casualties on both sides.

In light of events in Jerusalem, Egypt declared its "total rejection and condemnation of these oppressive Israeli practices," Foreign Minister Sameh Shoukry told the League.

The head of the Organization of Islamic Cooperation (OIC), which held an emergency meeting in Jeddah,"praised the steadfastness of the Palestinian people stationed in the occupied city of Jerusalem and their response to the Israeli attacks on the holy sites", Saudi state agency SPA reported.

"The Israeli government must finally understand that it will not be able to suppress the Palestinian people's legitimate rights and demands by using indiscriminate and disproportionate power," a Turkish foreign ministry statement said.

The Gaza health ministry said at least 28 Palestinians, including 10 children, had been killed. Israel disputed that account, saying it had killed at least 20 Hamas fighters and that a third of the hundreds of rockets launched by fighters had fallen short, causing Palestinian civilian casualties. 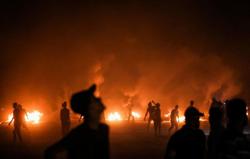