'I am not going anywhere,' suspended official in South Africa's ANC says 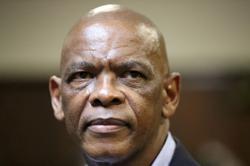 JOHANNESBURG (Reuters) -The secretary general of South Africa's ruling African National Congress (ANC) who has been suspended by the party over corruption charges told the state broadcaster on Friday "I am not going anywhere" and said he was being treated unfairly.

The ANC suspended Ace Magashule this week in line with tougher rules for members charged with corruption and other serious crimes, who were told to "step aside" or vacate their positions within 30 days or face suspension.

Magashule is one of the ANC's top six officials and runs day-to-day affairs in the party that has governed South Africa since the end of apartheid.

He is a key rival of President Cyril Ramaphosa, who is trying to stamp his authority on the divided party before a leadership contest next year.

Magashule has been charged with corruption over a contract to audit homes with asbestos roofs when he was premier of the Free State province. He has denied wrongdoing, calling the charges flimsy and fabricated in an interview with SABC.

"The ANC is acting in an unfair manner ... I have not committed any crime," Magashule told the state broadcaster, repeating his determination to stay in post.

Magashule said a resolution by the ANC's national executive at the end of March related to members charged with corruption or other serious crimes had been designed to remove him. He was suspended after failing to step aside within 30 days.

The "step aside" rule will test Ramaphosa's control over the ANC and his commitment to tackling corruption. The rule is on the agenda of a three-day virtual meeting of the national executive that starts on Saturday. Magashule said he would attend.