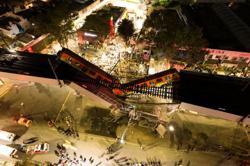 Workers move a train car from a site where an overpass for a metro partially collapsed with train cars on it at Olivos station in Mexico City, Mexico May 4, 2021. REUTERS/Henry Romero

MEXICO CITY (Reuters) - At least 24 people were killed and dozens injured when an elevated stretch of Mexico City's newest metro line collapsed, sending a train plunging onto a busy road below.

Here are some quotes from people affected by the accident:

Her husband Santos Reyes Perez, 31 "was coming back home from work and around 10:25 p.m. I lost contact with him, which is around the time of the accident. And since then I haven't had any news about him, and haven't found him."

"The hospitals tell me he's not there. They've identified everyone but I can't find my husband."

"My son didn't arrive when he always does. He didn't arrive. We started asking questions and ... we watched the metro accident on television. And my son always travels at that time."

"They found his cell phone and someone called us to come and find him at the hospital, to see what hospital he was in. And we visited various hospitals. And he wasn't on the list. And then they told us to come here to see if he was among those that didn't survive. And unfortunately he didn't."

Telentino's cousin Immer Del Aguila, 29, died in the accident, and he is angry with authorities.

"There has already been a problem (on the line). So why did the authorities ignore it? This could have been prevented."

"However, they didn't make themselves responsible and justice is needed."

Telentino wants "the weight of the law (to fall) on those people who at that time made this bridge to transport people and didn't do it well."

Hernandez lost his father, 61-year-old Jose Luis, who was an auto body mechanic and a "homebody," in the accident.

"He always use to go from his work to his house, though yesterday sadly he did not arrive back," he said. "At dawn all the time we were watching the news until went to the hospital to look for my dad."

Linea 12 "is also my transport line but yesterday fortunately, or unfortunately, I had another plan; otherwise, maybe the same could have happen to me"

"I can't touch the issue of money (compensation) because the truth is that nobody is going to give me back my father even if they give me 10 million pesos ($500,000)." 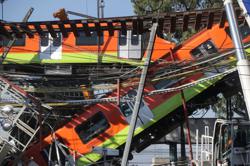 U.S. President Biden says he is confident he can meet Russia's Putin soon
EU calls on U.S. and others to exports their vaccines
Cuba protests diplomat's expulsion from Colombia amid protests
European rights ruling opens way for challenges to Poland's top court
White house says Iran sanctions could only be lifted if nuclear deal conditions met
'I am not going anywhere,' suspended official in South Africa's ANC says
Colombia's Duque meeting with opponents, hoping to calm deadly protests
Back in Brasilia, Lula lays foundations of anti-Bolsonaro coalition
Greece to reopen museums next week, ahead of tourism
Tears and singing as abducted Nigerian students return to parents