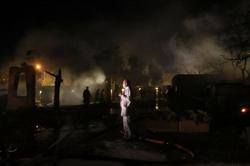 QUETTA, Pakistan (Reuters) - China's ambassador was staying at a hotel in southwest Pakistan that was bombed on Wednesday, but was not present when it was hit, Pakistan Interior Minister Sheikh Rashid Ahmad said.

The car bombing killed four people and wounded another 11.

"This was a big blast and the Chinese ambassador was also staying at this hotel, but he wasn't there at the time; he was out at a function," the minister, Sheikh Rashid Ahmad, told local TV channel ARY News.

The Chinese Embassy did not respond to a request for comment.