Pedro Castillo of Peru Libre party looks on after casting his vote, outside a polling station in Cajamarca, Peru April 11, 2021. Vidal Tarqui/ANDINA/Handout via REUTERS

LIMA (Reuters) - Peruvian socialist Pedro Castillo, the shock winner of Sunday's presidential election first round, has laid down a marker as the defender of the poor ahead of a run-off vote in June.

The little-known union leader and teacher, who rode on a horse to vote and often wears a cowboy hat, rose from the back of the pack in pre-election polls to finish first. He has around 19% of the vote with of ballots 96% counted https://www.resultados.eleccionesgenerales2021.pe/EG2021/EleccionesPresidenciales/RePres/T.

He will face conservative Keiko Fujimori, the daughter of ex-President Alberto Fujimori - imprisoned in 2009 over human rights abuses - and the heir of a powerful family that dominated Peru's political scene for decades in the presidency and in Congress.

"This is a battle between the rich and the poor, the struggle between the ... master and the slave," Castillo told reporters from Peru's north in comments broadcast on local TV channels.

Castillo, standing at under 4% of the vote in polls just a month before the election, surged through the field amid rising anger over the economy and the response to the coronavirus pandemic, which has hit Peru's poor the hardest.

Viewed as radical by many voters due to his plans to rewrite the Constitution and give the state more control over some industries, he now needs to turn his win in a fragmented first round into a serious run-off challenge.

He said he planned to invite all losing candidates "to sit down and talk, regardless of whether from the left or from the right" in coming days.

'DEFRAUDED BY THE SYSTEM'

Facing him will be Fujimori, 45, a seasoned political operator making her third run for the presidency. She herself has spent time in pre-trial detention over allegations of corruption that she denies. While no trial is imminent, prosecutors are seeking a 31-year jail sentence.

A free marketeer, she has pledged to keep in place an economic model that helped the copper-rich country grow at one of the highest rates in Latin America over recent decades and ensure strong public finances.

The pandemic, however, has spotlighted glaring inequalities. The economy crashed 11.2% last year, poverty has risen and Peru has had one of the highest excess death tolls per capita in the world during the health crisis.

Fujimori's camp hinted that she could look to give more support to those less well off, and that her party had learnt lessons from the past.

"There is a group of Peruvians who feel defrauded by the system, who feel detached from the social economy of the market, that growth has not reached them," Luis Galarreta, her vice presidential candidate told local radio station RPP. 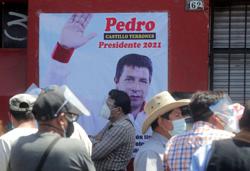