Britain's Princess Anne looks on as she visits the Royal Yacht Squadron, after Prince Philip, husband of Queen Elizabeth, died at the age of 99, in Cowes on the Isle of Wight, Britain April 14, 2021. REUTERS/Peter Nicholls

COWES, Isle of Wight, England (Reuters) - Princess Anne, the daughter of Queen Elizabeth and Prince Philip, was on Wednesday seen in public for the first time since the death of her father last week.

Anne, 70, dressed in black and in sunglasses, arrived at the Royal Yacht Squadron, a sailing club in Cowes on the Isle of Wight.

"My father has been my teacher, my supporter and my critic, but mostly it is his example of a life well lived and service freely given that I most wanted to emulate," Anne, the Princess Royal, said in a statement on Sunday.

"We will miss him but he leaves a legacy which can inspire us all." 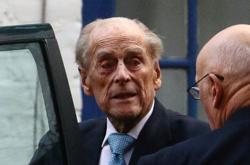