MANILA (Reuters) - The Philippines said on Tuesday it had summoned the Chinese ambassador to convey the Southeast Asian country's "utmost displeasure" over the continued presence of Chinese vessels in disputed waters around a reef in the South China Sea.

In a statement, the Department of Foreign Affairs said Chinese Ambassador Huang Xilian was summoned on Monday and told that China should immediately withdraw all its vessels from the disputed Whitsun reef and other Philippine maritime zones.

The Philippines last month described the presence of about 220 boats believed to be manned by militias inside its 200 mile (322 km) exclusive economic zone as "swarming and threatening", while the United States, Japan and others have voiced concern about China’s intentions, prompting rebukes by Beijing.

The foreign ministry said on Tuesday it had reminded Huang that the Philippines had won a landmark arbitration case in 2016, which backed its sovereign entitlements amid rival claims by China.

It also called on the Chinese Embassy to ensure "proper decorum and manners in the conduct of their duties as guests of the Philippines" after the embassy had earlier said a call by Manila for a withdrawal of the flotilla was "unprofessional".

"Both sides affirmed the use of peaceful settlement of disputes in addressing their differences in the South China Sea issue," the foreign ministry said.

China's embassy in Manila did not immediately respond to a request for comment.

Chinese diplomats have previously said the vessels were taking shelter from rough sees and were not manned by militias, claims the foreign ministry called "blatant falsehoods."

The last time a Chinese envoy was summoned by Manila was in 2019 after a Chinese vessel sunk a Philippine boat.

Since come to power, President Rodrigo Duterte has criticised U.S. foreign policy and sought to improve ties with Beijing, but China's maritime assertiveness has put him in a difficult spot at times.

Philippine and U.S. troops began military exercises on Monday, in a demonstration of what they said was a commitment to the U.S.-Philippines alliance. 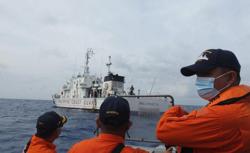 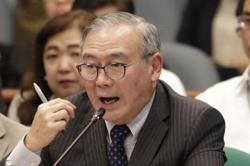