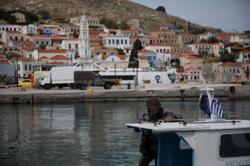 A view of a damaged house following an earthquake in the village of Damasi, in central Greece, March 3, 2021. REUTERS/Thanos Floulis

DAMASI, Greece (Reuters) - An earthquake of magnitude 6.2 struck central Greece on Wednesday, sending people rushing from their homes and damaging a number of houses and cars but drawing no immediate reports of casualties.

The quake, which was felt across the country, struck close to Tyrnavos, a town about 230 km (140 miles) north of Athens, the U.S. Geological Survey (USGS) said.

"I have never experienced anything like this before, I immediately left the house," a citizen in Larissa region, in central Greece, told ERT state television.

The USGS said the magnitude was 6.3, while the European Mediterranean Seismological Centre (EMSC) put it 6.2, revising earlier reports that suggested the tremor was as much as 6.9.

Sixty three students were evacuated safely from a school in the nearby village of Damasi which suffered serious damage, while residents were told to shelter in a local stadium.

"We need them to bring (medical) masks, to bring water, basic supplies," said local resident Victoria Megka. "We want them to set up tents for the children, there are small children, infants, (and) there are elderly," she said.

In another village in the region fire-fighters rescued an elderly disabled man from a house that partly collapsed but there were no immediate reports of other people trapped in buildings in the area.

Greek seismologists said there was a sequence of post-quake tremors and said schools should stay closed in coming days.

Costas Agorastos, a local governor in the central Thessaly region, told state television that local schools had been advised to shut.

Greece is often rattled by earthquakes, most of them causing no serious damage. A quake measuring 5.9 killed dozens of people in Athens in 1999.

A total of 100 people were also killed in Turkey and Greece after a strong earthquake struck the Aegean Sea in October.

Turkish Foreign Minister Mevlut Cavusoglu told a news conference in Ankara that Turkey would provide Greece with "all the support we can, if needed." 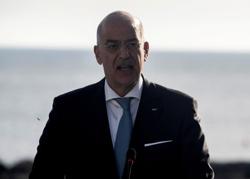