The three states are Saxony and Bavaria, which border the Czech Republic, and their neighbour, Thuringia.

Prague on Friday tightened restrictions on shops, schools and movement for the next three weeks in a bid to slow a surge of coronavirus infections.

The country of 10.7 million had the highest per capita infection rate in the world over the past week, according to the Our World in Data website, 10 times that of Germany, a fellow member of the European Union.

France has already pledged to supply 100,000 vaccine doses to the Czech Republic and Israel has sent 5,000 shots. 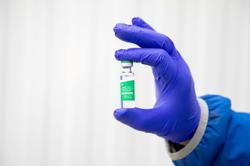