BRUSSELS, Jan. 26 (Xinhua) -- The transparency mechanism proposed by the European Commission on the export of COVID-19 vaccines produced in the European Union (EU) is "not an export ban," a spokesperson explained on Tuesday.

Following AstraZeneca's change in the schedule of its vaccine delivery to the EU, the Commission proposed on Monday to put in place a transparency mechanism to keep track of the export of vaccines from the bloc.

Stefan de Keersmaecker, Commission spokesperson for public health and food safety, said on Tuesday that the mechanism is "a vaccine export transparency and monitoring system to demonstrate the export intentions" and "not an export ban."

The mechanism "is based on the idea that the European Commission has spent quite a lot of funds in these production capacities to make sure that there are sufficient doses available for the EU and beyond," he said.

Asked to clarify what to do after registering the notice, Eric Mamer, chief spokesperson for the Commission, did not elaborate but said "you could not basically devise strategies if you don't know what's happening."

Mamer defended the EU's role in supporting equitable distribution and use of COVID-19 vaccines globally, stressing that it is the biggest donor to the COVAX facility -- the global initiative to ensure rapid and equitable access to COVID-19 vaccines for all countries.

"If there is one continent which is playing its role as far as it can in terms of ensuring that countries around the globe, including those that have lower incomes than the European Union, can receive doses, it is the European Union," Mamer claimed.

But he admitted that the pledge is not "an easy undertaking."

"We are determined to contribute globally to resolving the pandemic, but we also mean business when it comes to Europe," said Mamer, quoting the remarks made by Commission President Ursula von der Leyen on Tuesday at the virtual World Economic Forum Davos Agenda event.

AstraZeneca has not provided the EU with a satisfactory answer yet as to the reason why its vaccine delivery will be reduced considerably. Two meetings took place on Monday, and another will be held on Wednesday to discuss the matter.

The United Kingdom, where the pharmaceutical company is headquartered and granted the marketing authorization for its vaccines, has not reported any shortage of supplies.

The COVID-19 vaccine developed by AstraZeneca together with the University of Oxford will hopefully be greenlighted by the European Medicines Agency this week.

The outcry about the proposed mechanism to regulate the vaccines export underlined the dilemma faced by the EU, which has secured several deals on COVID-19 vaccines and pledged to its members access to the vaccines "at the same time on the basis of population size," as well as promising to share with non-EU countries.

One of its Balkan partners, Serbia, has approved a wide portfolio that also includes vaccines produced in Russia and China, and secured a higher rate of vaccination doses relative to its population than most EU countries. 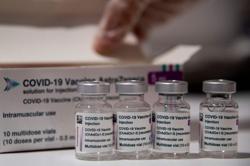