By Zhang Tianlang and Liu Chang

BEIJING, Jan. 25 (Xinhua) -- Chinese President Xi Jinping said on Monday he believes that the Chinese side, with strong support from various parties, will complete all preparation work as scheduled, so as to ensure the Beijing Winter Olympics a complete success.

Xi made the remarks during his telephone conversation with International Olympic Committee (IOC) President Thomas Bach.

Xi said that the Chinese side appreciates the IOC's active support for China's sports enterprise, and will continue supporting the IOC's work, adding that China is willing to join the IOC and other countries in ensuring safe and smooth hosting of the Tokyo Olympics and the Beijing Winter Olympics, and contributing to an early victory for the international community over the pandemic, recovery of the world economy, and safeguarding the lives and health of the people of all countries.

Xi also stressed that China has taken the lead in putting its own epidemic under control and realizing economic recovery, creating favorable conditions for the smooth hosting of the Beijing Winter Olympics.

China has strictly implemented prevention and control measures, overcome the impact of the epidemic, and actively promoted the steady progress of all preparation work, Xi said, adding that at present, the construction of venues and infrastructure for the Beijing Winter Olympics has achieved phased progress.

He also noted that the organization of the Games has been carried out in an orderly manner; the service guarantee for the Games is being conducted in an all-round way; publicity and promotion are warming up; in-depth international exchanges and cooperation are unfolding; and sustainable development and heritage work have seen remarkable progress.

China takes the preparation for the Beijing Winter Olympics as an opportunity to promote the popularization and development of ice and snow sports, Xi said, adding that Beijing, the only city in the world that has hosted the Summer and Winter Olympics, will make unique contributions to the international Olympic Movement.

For his part, Bach said under the strong leadership of Xi, China has made outstanding achievements in combating COVID-19, taken the lead in economic recovery and become an important engine for world economic recovery. He expressed sincere congratulations on China's achievements.

With the great importance attached by the Chinese government and the strong support of the Chinese people, preparations for the Beijing Winter Olympics have overcome the impact of the pandemic and are progressing smoothly, said Bach.

The IOC, he said, supports China's concept of hosting a green, inclusive, open and clean Winter Olympics and stands ready to work with China to ensure a successful, splendid and safe Games, which will not only realize the vision of promoting winter sports among 300 million Chinese people, but also strongly advance the development of international Olympic Movement.

The IOC stays committed to upholding the Olympic spirit and opposing the politicization of sports, Bach said, adding that the organization is ready to continue strengthening long-term strategic cooperation with China.

Bach also extended his Chinese New Year greetings to the Chinese people, wishing them new success in the New Year. 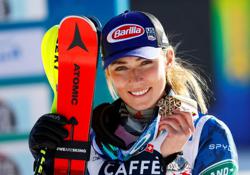