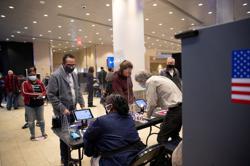 WASHINGTON (Reuters) - Former President Donald Trump's trial in the U.S. Senate will start in the week of Feb. 8, Senate leaders said on Friday, following his impeachment in the House of Representatives earlier this month on a charge of inciting an insurrection.

House Majority Leader Chuck Schumer said the charge against Trump stemming from his incendiary speech to supporters before they stormed the U.S. Capitol on Jan. 6 would be presented to the Senate at 7 p.m. EST (midnight GMT) on Monday by members of the House acting as prosecutors in the trial.

Senators, who will act as jurors, will be sworn in the next day, and the two sides will have a period to prepare for the trial, Schumer said, while the Senate deals with other business including confirming President Joe Biden's Cabinet nominees and considering a COVID-19 relief bill.

"Then, once the briefs are drafted, presentations by the parties will commence the week of February 8th," said Schumer, a Democrat.

A spokesman for Senate Minority Leader Mitch McConnell, a Republican, said McConnell was glad that Schumer had "agreed to Republicans’ request for additional time during the pre-trial phase," and that the trial could begin on Feb. 9.

Following is the agreement on the timeline according to McConnell's spokesman:

- Due date for President’s answer to article

- Due date for House’s pre-trial brief

- Due date for President’s pre-trial brief

- Due date for House’s replication to answer