OTTAWA (ANN): A woman who was arrested last month in British Columbia, Canada, gave her jailors 4.5 stars in a “review” she sent to police after she got out.

The West Shore Royal Canadian Mounted Police (RCMP) shared the handwritten letter of the woman, whose identity was withheld, noting that such acts were rare in their field.

“@WestshoreRCMP don’t often get thank you cards from people who ‘stay’ with us, but this was sure nice to see. [4.5-star] rating to boot!” the West Shore RCMP tweeted on Jan. 19.

In the letter, the woman commended the RCMP for their care and kindness while she was in their custody.

“I was nervous about staying with you guys during my trip to the island, but I wanted to let you know that I appreciated how helpful and kind everyone was, ” the woman said.

“Especially the 4 jailors who do a tough job and are often underappreciated by the people in their care. You make a difference, ” she added.

Police chose not to disclose the reason for the woman’s arrest to avoid her being identified, but confirmed that she spent “a number of days” in custody, as per CTV News on Jan. 18.

She also noted that this was the only time she could tell that the RCMP had received such a letter from someone formerly under their custody, the report said.

“We were very impressed and happy with our review... The point here is that we do treat everybody with respect. Just because you’re in jail, you still have your rights and we’re going to respect that, ” Saggar was quoted as saying. – Philippine Daily Inquirer/Asia News Network

@WestshoreRCMP don’t often get thank you cards from people who “stay” with us, but this was sure nice to see. 4.5 star rating to boot! pic.twitter.com/3vfLhzQOG4 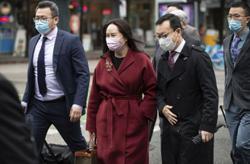