WASHINGTON DC: Kamala Harris has been sworn in as the Vice-President of the United States - the first woman, first African-American and first Asian-American to serve in the role.

She was sworn in on Wednesday (Jan 20) by Supreme Court Justice Sonia Sotomayor, who was also the first woman of colour to be appointed to the highest court in the United States.

The Vice-President had earlier been escorted to the Capitol platform for the ceremony by Capitol police officer Eugene Goodman, who was hailed as a hero for leading rioters away from the Senate chamber during a violent attack on the Capitol on Jan 6 when both Houses met to confirm Biden's electoral college victory.

Hall is the first African-American woman to be promoted to the rank of fire captain with the South Fulton fire and rescue department in Georgia.

Singer Lady Gaga, who had campaigned for Biden, performed the national anthem at the ceremony. 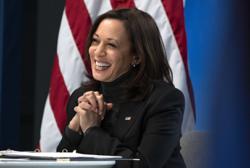