TEGUCIGALPA, Jan. 19 (Xinhua) -- Hundreds of Hondurans, who were part of a migrant caravan headed north to the U.S. border, were returning home after the caravan met with resistance from authorities and fell apart in Guatemala, the Honduran government said on Tuesday.

According to Jerez, the Honduran migrants were transported by bus to the El Florido border crossing between Guatemala and Honduras, where they are being processed.

The Honduran Security Secretariat estimated between 3,500 and 4,000 migrants joined the caravan as it departed from northern Honduras last week.

"Returning to the country is the only sure thing that our compatriots have when they migrate irregularly. Currently, both Mexico and Guatemala have redoubled their security, so reaching the U.S. border is increasingly difficult," said Jerez.

She also lamented that the caravans of mainly poor migrants seeking opportunities abroad had become a business for human traffickers.

As proof, she cited the more than 300 human traffickers that the Security Secretariat has captured in the last three years. 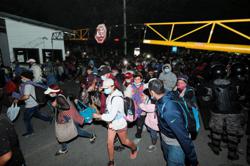