RAMALLAH, Jan. 14 (Xinhua) -- Palestine announced on Thursday a two-week extension of the lockdown measures against the rapid spread of COVID-19 across the West Bank and the Gaza Strip.

Ibrahim Milhem, the Palestinian government spokesman, said in a press statement sent to Xinhua that all universities and institutes of all levels will continue the home-based e-learning.

The grades 7-11 would return to normal working schedule under strict restrictions including social distancing and wearing facemasks, he added.

Milhem announced a full ban on public and private transportation between the West Bank districts, except medical staff and the Ministry of Education staff.

Meanwhile, movement and transportation within the individual districts would be banned from 7 p.m. to 6 a.m. during the two-week lockdown, the spokesman added.

"Sports clubs, barbershops, indoors recreational facilities, restaurants, and cafes are allowed to work at an emergency pace with no more than 30 percent of their staff," Milhem noted.

Palestine reported 736 new COVID-19 cases on Thursday, raising the total number in the West Bank, East Jerusalem, and the Gaza Strip to 169,388 since March 2020, Health Minister Mai al-Kaila said in a press statement.

Out of the new infections, 368 were recorded in Gaza, al-Kaila added. 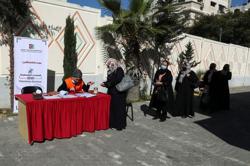 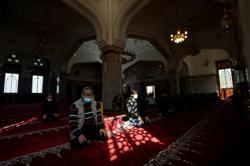