BEIJING/SINGAPORE (Reuters) - Fragmental releases of efficacy data for the COVID-19 vaccine developed by China's Sinovac could undermine confidence in the shot, experts warned, as several countries prepare for mass inoculations with the vaccine.

Turkish researchers said on Thursday Sinovac's CoronaVac was 91.25% effective based on an interim analysis only to see a confusing readout the same day from Brazil which said the vaccine's efficacy was between 50% and 90%.

Brazil has also delayed release of its efficacy data on the vaccine three times, as Sinovac seeks to consolidate data from global trials that include Indonesia, Turkey and Chile.

The efficacy data is closely watched as many developing countries have signed deals to use the Sinovac vaccine which is easier to store and transport than rival shots developed by Pfizer and its partner BioNTech and Moderna.

Experts say it's not unusual for a vaccine to show different efficacy rates in various settings, as trial protocols, data size and population could impact results, but the way CoronaVac data has been released created some confusion.

"You really want the data to be compelling at first presentation; this is what Pfizer and Moderna achieved, AstraZeneca less so," Jerome Kim, head of the International Vaccine Institute, a Seoul-based non-profit agency devoted to research in vaccine.

"With multiple 'leaks' of data and suggestions of this or that you don't see the same effect with Sinovac; perhaps the final presentation in January will be more compelling."

A Chinese foreign ministry spokesman said on Monday at a daily briefing that its vaccine developers were pushing forward "in strict adherence to scientific principles and regulatory requirement".

Four other Chinese vaccines from Sinopharm, CanSino Biologics and the Chinese Academy of Sciences are in Phase 3 clinical trials.

The Turkish trial data for CoronaVac is based on analysis of 1,322 participants which included 29 infected people, and efficacy evaluations were made 14 days after the second dose was administered.

Authorities initially planned to announce results when the number of patients reached 40, but released interim evaluation as the country looks to grant emergency use authorization.

Indonesia, which is also considering the shot for mass inoculation, confused the world earlier this month when state-owned Bio Farma said the vaccine's efficacy was 97%. It later clarified that the prevention rate could not be determined yet and it was necessary to wait for complete data.

"When you are not able to release sufficient details, it's probably better not to make your announcement like that," said Paul Griffin, a professor at the University of Queensland who is also running a number of COVID-19 vaccine studies.

With efficacy data in Turkey based on just 1,322 subjects and small infection cases, experts say more data from a larger number of participants would be needed to seek regulatory approval.

"It's difficult to determine how well (the) Sinovac vaccine works based solely on 29 coronavirus cases," Kim said.

"It would be good to have more volunteers and more infections, which would boost the robustness of the efficacy data."

That would make data from Brazil crucial where it has completed a trial with 13,000 volunteers, while studies in Turkey and Indonesia involve more than 7,000 and 1,600 respectively.

Some experts warned greater scrutiny on data compilation and analysis was expected for COVID-19 vaccines developed in China due to its patchy safety track record.

"This should be analysed very clearly and transparently. And transparency is one of the biggest concerns for China, especially with their vaccine and also because of their track record," said Dicky Budiman, an epidemiologist at Queensland’s Griffith University.

"So this is one of the very important and crucial times for China to show the world how they have improved the quality of their vaccines... This is something they have to explain to the world, through of course scientific papers." 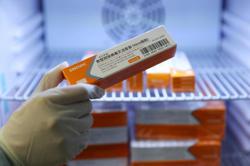