PARIS, Dec. 15 (Xinhua) -- Swedish athletes were the biggest winners at the first FIS Ski Cross World Cup event held in Arosa, Switzerland on Tuesday, as David Mobaerg and Alexandra Edebo respectively topped the men's and women's competitions under the floodlights.

Mobaerg beat the Swiss trio of Alex Fiva, Joos Berry and Jonas Lenherr in the men's big final. The 21-year-old managed to get in the front after the first couple of elements and left the home favorites to fight for second place.

"I have no words. It was just a perfect day. I had a good start, I was fast everywhere and I had a really good feeling throughout the whole course and the entire competition, so I am super happy," Mobaerg said after his maiden World Cup win.

Fiva and Berry went head-to-head after the jump and into the negative, but it was Fiva who went ahead in the roller section to take second place with Berry finishing third.

The other Swiss athlete Lenherr got close to Berry in the final stage, but failed to surpass his compatriot and ranked fourth.

On the women's side, it was Mobaerg's compatriot Edebo who pocketed her first World Cup title.

Edebo jumped out of the starting gate and immediately got into pole position to lead the heat. The 24-year-old, known as the Swedish Viking Princess, held off an attack from local skier Fanny Smith after the jump before the negative turn to maintain her lead to the line.

The back-to-back races will continue on Wednesday night at the tourist resort in eastern Switzerland. 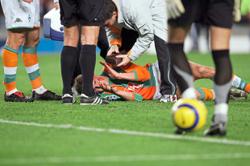