NEW YORK, Dec. 13 (Xinhua) -- So far this year, 8,400 retailers and 110,000 restaurants have been closed in the United States, as the COVID-19 pandemic ravages the country, claiming more than 298,000 lives, according to the latest industry statistics.

New data from Coresight Research revealed American retailers have announced 8,400 closures this year. Ascena Retail closed most of its locations, at nearly 1,200. Coresight anticipated that closures will snowball and set a new record this year, breaking the 2019 record of 9,302 closures tracked by the firm.

Business is equally bleak for the U.S. catering industry. About 17 percent of the country's restaurants, roughly 110,000, have permanently closed this year, with thousands more on the brink of closure, according to a recent National Restaurant Association report.

"There's no way to sugarcoat it: 2020 was a brutal year for restaurants and stores. The pandemic, massive amounts of debt and a shift in shopping as well as dining habits created a lethal cocktail of bankruptcies and closures," said CNN on Saturday while analysing the closures.

"With lockdowns devastating retail and restaurants -- many of which were already in deep trouble, dozens declared bankruptcy this year," it added.

In related development, the number of initial jobless claims in the United States rose to reach 853,000 last week, the highest since mid-September, the Labor Department reported on Thursday.

Meanwhile, the White House on Tuesday proposed a new 916-billion-U.S.-dollar COVID-19 relief package to Congress as the U.S. economy faces the risk of a double-dip recession amid the pandemic.

Yet, Congress Democrats and Republicans remain divided on the scope and size of a possible deal, rendering an uncertain fate to the bill.

Without a new relief package, many Americans will soon lose their unemployment benefits and begin to face hardships like eviction and foreclosure by the end of the year. 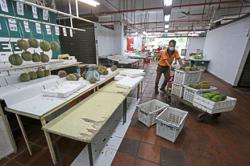