BERLIN (Reuters) - Germany might tighten restrictions to curb the spread of the coronavirus, Health Minister Jens Spahn said, as a partial lockdown and social distancing rules in place since the start of November have slowed, but not stopped the disease spreading.

Chancellor Angela Merkel told party colleagues on Monday that existing lockdown measures in place would not be sufficient to get the European Union's most populous country through the winter, participants at the meeting said.

"A short and comprehensive approach to really make a difference is probably more successful," Spahn told public broadcaster Phoenix, according to comments distributed late on Monday.

"If we don't get there within the next one or two weeks until Christmas, we have to discuss it," he added.

Under the partial lockdown introduced in early November, restaurants and bars are shut apart from takeaways. Shops and schools remain open.

Political leaders believe the restrictions prevented further exponential growth of new infections, but numbers have plateaued. Germany reported 487 deaths on a single day last week, the highest number since the start of the pandemic.

Berlin Mayor Michael Mueller said any further measures - such as extending school Christmas holidays by a week, offering digital lessons, or putting restrictions on retail business after Christmas - must be adopted by all states.

"I can well imagine that there will be restrictions," he told broadcaster ARD. "There is no reason to buy a jumper on the 28th of December, you can do that before then ... But something like this should or must take place nationwide." 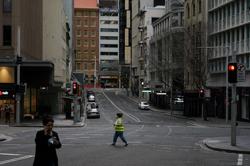