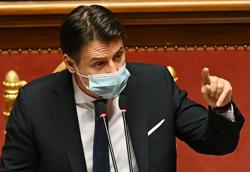 ROME, Nov. 30 (Xinhua) -- Active coronavirus infections in Italy decreased by 7,300 on a daily basis on Monday, as the country seemed finally to consolidate some benefits from the latest restrictions imposed in early November to slow down the second wave of the pandemic.

A further 16,377 coronavirus cases were registered over the last 24 hours, bringing the overall cases to 1,601,554, according to the Health Ministry.

However, active coronavirus infections were 788,471 on Monday, down from 795,771 on Sunday, the latest statistics showed.

The daily drop in active COVID-19 infections came after a slowdown in the contagion rate across the country had already been registered over the last two weeks, according to the monitoring by Italy's National Health Institute (ISS).

Data also showed 23,004 new recoveries and 672 new fatalities were recorded on Monday. The number of people recovered since the pandemic officially broke out here in late February rose to 757,507, while the country's death toll grew to 55,576.

Therefore, on Friday, Health Minister Roberto Speranza relaxed restrictions in five of Italy's 20 regions, and specifically downgraded three (Lombardy, Piedmont, and Calabria) from red zone to orange zone and two others (Sicily and Liguria) from orange to yellow zone.

In early November, the central government introduced a three-tiered system that split the country into three zones (red for the highest risk, orange for medium risk, and yellow for low risk) according to the level of virus transmission and the situation of the public health system in each region.

Overall, the provision was worth some 8 billion euros (9.6 billion U.S. dollars), according to the government.

It included various tax delays and tax exemptions for firms, and a single tranche of economic aid -- up to 1,000 euros for workers such as those employed in the show business and tourism sectors -- among other measures.

Meanwhile, Italians wait to see under which rules and level of restrictions they would be spending December -- particularly Christmas and New Year's Eve.

Such rules will be delivered through a specific cabinet decree due by Thursday at the latest. Decisions to be taken included whether inter-regional movements, family reunions, and holiday travels will be allowed or not during Christmas and New Year's Eve.

According to the latest announcements by Conte, the central government would be much keen to impose a ban on ski trips until early January to avoid a risky mass movement of people. However, this would weigh heavily on the tourism industry, already hit hard by the pandemic throughout the year.

An attempt at compromise in this regard came from Italy's five northern regions and two autonomous provinces sharing the Alpine mountains, which on Monday suggested letting sky resorts to reopen, but only for residents and for people who checked in local hotels, Ansa news agency reported.

"If the ski pass is allowed only to those staying in accommodation facilities or second houses, it will be possible to know precisely the daily number of customers and therefore better manage the flows to and from the ski lifts," Ansa quoted the regional representatives as saying.