PARIS, Nov. 30 (Xinhua) -- France on Monday registered 4,005 confirmed cases of COVID-19 and 406 deaths from the disease in the last 24 hours, while the number of hospitalized patients continued a downward trend, data released by health authorities showed.

Since the pandemic outbreak, a total of 2,222,488 people have been infected with the novel coronavirus, of whom 52,731 have died.

The number of patients in hospitals stood at 28,258, a one-day decrease of 55. Of those hospitalized, 3,751 were put on ventilators, down by five from Sunday's data.

Early Monday, High Health Authority, the country's top health advisory body, recommended a vaccination campaign in five stages and on a volunteer basis which should target first nursing homes residents and their staff.

In the second phase, people aged over 65 and caregivers should get the vaccine. The three other stages would be progressive and target people with comorbidity and other professionals exposed to the virus.

Last week, President Emmanuel Macron announced that the vaccination program would start at the end of December or early January, provided the efficiency and safety of vaccines are approved by regulators.

Countries including France, China, Russia, the United Kingdom and the United States are racing to find a vaccine. As of Nov. 12, the World Health Organisation counted 212 COVID-19 candidate vaccines being developed worldwide, 48 of them in clinical trials. 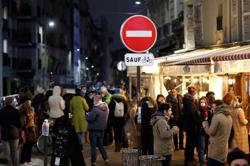