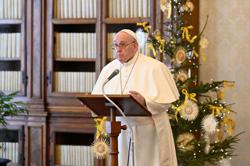 Pope Francis leads a consistory ceremony as he elevates 13 Roman Catholic prelates to the rank of cardinal, at St. Peter's Basilica at the Vatican, November 28, 2020. Fabio Frustaci/Pool via REUTERS

Cardinal electors under the age of 80 and eligible to enter a conclave to elect a new pope after Francis dies or resigns:

- Archbishop Marcello Semeraro,73, Italian, prefect of the Vatican's Congregation for the Causes of Saints.

New cardinals over 80 years old and being honoured for their long service to the Church. They cannot enter a conclave.