FILE PHOTO: Pfizer's logo is reflected in a drop on a syringe needle in this illustration taken November 9, 2020. REUTERS/Dado Ruvic/Illustration/File Photo

Alejandro Cané, the North America chief of scientific and medical affairs for Pfizer's vaccines division, told Reuters in an interview in Buenos Aires that Latin America and elsewhere in the world should have a "similar timeline" to the United States.

"At the beginning the idea is to have the vaccine authorized in the United States," Cané said. "We are confident that in the next weeks or month we will have the vaccine not only in use in the U.S. and Europe, but also in Latin American countries."

Pfizer is applying to U.S. health regulators on Friday for emergency use authorization (EUA) of its COVID-19 vaccine, the first such application, which marks a major step toward providing protection against the deadly virus.

"The idea is just to collect all the info from that trial and we are waiting now for feedback from the FDA to have a VRBPAC (Vaccines and Related Biological Products Advisory Committee) meeting and after that a potential authorization for our emergency use authorization," he said.

"In that way, the vaccine could be used and distributed in the United States," he added, saying that authorization could come around 1-2 weeks after the VRBPAC meeting.

Cané said that Pfizer had supply agreements in Chile, Mexico and Peru and that there were several other conversations ongoing, including in Argentina, where the government has said it could receive 750,000 doses of the vaccine by December.

Cané said Pfizer was ready to supply and distribute around 50 million doses of the vaccine, which requires ultra-low temperature storage, before the end of 2020, which would be split between the United States and the rest of the world.

The firm was aiming to supply around 1.3 billion doses by the end of next year, he said, adding the vaccine had shown high efficacy across different ethnicities.

Regarding the need for ultra-low temperatures in the supply chain, which creates complications in less-developed regions, Cané said it was a matter of speed. A hardier second-generation version could be ready by 2022.

"We know that it is complicated compared to other vaccines, but we are in the midst of a pandemic situation and we are trying to provide the more efficacious solution in the quickest manner," he said. 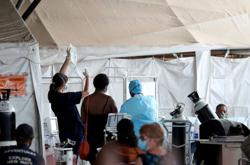