PARIS (Reuters) - The knife-wielding attacker who beheaded a woman and killed two other people at a church in the French city of Nice on Thursday is believed by law enforcement to be a 21-year old Tunisian national, a police source told Reuters.

The man had recently entered France via Italy, the source said. His identity is still being checked by law enforcement, the source added. 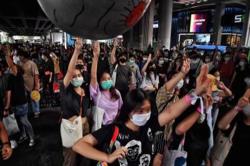