ZHUJI, China, Oct. 25 (Xinhua) -- Five players scored in double digits to help the Jilin Northeast Tigers to their fourth straight win after beating the Tianjin Pioneers 105-97, while Sun Minghui pocketed 27 points and 10 assists to help the Zhejiang Lions to defeat the Shenzhen Aviators 99-88 in the fourth round of the Chinese Basketball Association here on Sunday.

Tianjin center Marko Todorovic posted a game-high 41 points and 11 rebounds, and he helped his side to lead the game 55-47 at half-time.

"We did not do a good job in our defense and rebounds in the first half, especially not for Todorovic's return," Jilin coach Wang Han admitted.

However, Jilin withstood Todorovic's return in the second half and began to gain ground back, and they extended their advantage to 10 points in the last quarter.

"Our defensive quality improved after the break, which earned us more fast breaks," Wang reflected.

The Zhejiang Lions led the game 27-17 after the first quarter, though Shenzhen narrowed the gap to six points at half-time.

"We had a good start to the match, but our team didn't play well in the second quarter. Our rivals grabbed more rebounds than us," rued Zhejiang head coach Li Chunjiang.

Zhejiang's new international player Miroslav Radulica scored 16 points in the third quarter to help them lead 73-65 into the last period, and they didn't allow Shenzhen to reverse the scoreline in the last quarter.

"Radulica played in the CBA for more than four years. We have been training together for days since he completed his quarantine. That's the reason why he integrated himself well," Li said. 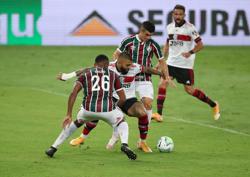