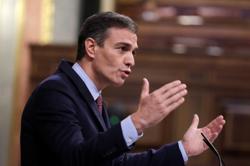 Spanish Prime Minister Pedro Sanchez and deputies applaud during a no confidence motion against the government at parliament in Madrid, Spain, October 22, 2020. Pablo Blazquez Dominguez/Pool via Reuters

MADRID (Reuters) - Spain's parliament on Thursday threw out, as expected, a motion of no confidence in Socialist Prime Minister Pedro Sanchez launched by the far-right Vox party and dismissed as a 'circus show' by the main conservative opposition People' Party (PP).

Vox, which argued the minority leftist coalition government had botched the handling of the coronavirus pandemic, was the only party that voted for it a day after Spain became the first nation in Western Europe to pass 1 million total infections.

Highlighting growing divisions and power struggle on the right, PP head Pablo Casado had attacked Vox - the third-largest force in a deeply fragmented parliament - in his fiery speech before the vote, saying its proposal only helped reinforce the minority leftist coalition government's grip on power.

"You are already part of Spain's problem and cannot be part of the solution that my party represents," he told parliament, addressing Vox leader Santiago Abascal. "PP does not want to be the party of lies, fear, rage and manipulation."

Abascal said PP, which is Vox's ally in some regional and municipal governments, had committed "a gigantic error" rejecting the motion and attacking his party.

Various analysts and health experts have said the politicisation of the response to the health crisis, which often saw the central government locking horns with regional authorities, has hampered the effort.