Bettors on British exchange Smarkets give Biden a 63% chance of winning the Nov. 3 election, up from 55% before the acrimonious debate. The Republican Trump's chances remain unchanged at 43%.

"It was clearly about personalities rather than content," Sarbjit Bakhshi, head of political markets at Smarkets, told the Reuters Global Markets Forum on Thursday. People betting on how various states might vote learned nothing new, he said.

On UK-based Betfair Exchange, Biden's odds improved to 60% after the debate, up from 56%, while Trump's chances worsened to 40% from 43% pre-debate.

"Biden is pitching himself in a very different way to Hillary Clinton, he's emphasising his working-class, blue-collar credentials and emphasising the class aspect that it's Scranton versus Park Avenue," Betfair spokesperson Darren Hughes said on Wednesday in reference to Trump's 2016 rival.

Trump repeatedly interrupted Biden and the moderator in their Tuesday night encounter, with Trump questioning Biden's intelligence and Biden calling Trump a racist, a liar and the worst president ever.

Smarkets odds give Democrats a 60% likelihood of winning both the popular and Electoral College votes.

On London-based Ladbrokes Coral Group, bettors gave a 30% chance of a repeat of 2016 when Trump lost the popular vote but won the state-by-state Electoral College vote that decides the winner.

"There are a lot of gamblers placing very unrealistic expectations on Trump," Matthew Shaddick, head of politics betting at Ladbrokes Coral said on GMF on Tuesday.

"I think 'shy Trumpers' is one of the major reasons people are prepared to back Trump at very low odds. But I am very sceptical."

Reuters/Ipsos polling before the debate showed 51% of likely voters backing Biden while 42% said they would vote for Trump, with the remainder undecided.

Graphic - Where Biden and Trump stand on key issues: https://graphics.reuters.com/USA-ELECTION/POLICY/ygdpzwarjvw/index.html

Graphic - State of the battlegrounds: https://graphics.reuters.com/USA-ELECTION/BATTLEGROUNDS/nmopawwakpa/index.html

(These interviews were conducted in the Reuters Global Markets Forum, a chat room hosted on the Refinitiv Messenger platform. Sign up here to join GMF: https://refini.tv/33uoFoQ)

(Reporting by Divya Chowdhury in Mumbai and Aaron Saldanha; Editing by Howard Goller) 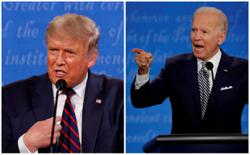