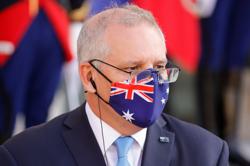 TORONTO (Reuters) - Ontario could reach 1,000 new COVID-19 cases per day in the first half of October, new projections released on Wednesday showed, putting Canada's most populous province on a trajectory similar to the hard-hit Australian state of Victoria.

The projections do not consider the impact of modest new restrictions introduced earlier in September and come on a day when the province reported 625 new cases.

A graph of projected cases in the modeling showed Ontario beginning to track the case spike in Victoria, which declared a state of disaster and imposed a curfew and strict movement restrictions on Aug 1.

"We are starting to see that sharp upward curve," Adalsteinn Brown, dean of the University of Toronto's school of public health, told reporters, noting that cases are doubling every 10 to 12 days.

Ontario Chief Medical Officer David Williams said officials are looking at the risk associated with some banquet halls, group fitness classes, and workplaces that are "less than stringent" about employees who are sick or required to quarantine coming to work.

The Ontario government announced a C$2.8 billion (1.63 billion pounds) spending plan to slow the spread of the virus in the coming months. It was not immediately clear whether the funds were from provincial coffers or provided by the federal government.

Ontario brought in some new measures on Sept. 19 and 25, reducing the size of social gatherings in some hot spots, limiting the hours that bars and restaurants can operate and serve alcohol, and closing strip clubs.

Officials said it is still too early to see the full impact of those changes.

Ontario reopened casinos at sharply reduced capacity on Monday, the same day it reported an all-time high of 700 new cases.

"Guys, give your heads a shake," Ford said at a briefing in Toronto. "We're all in this together."

(Reporting by Allison Martell in Toronto and Moira Warburton in Vancouver; editing by Jonathan Oatis)