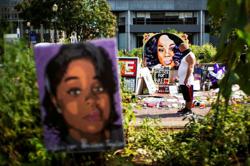 Protesters march during a peaceful protest after a grand jury decided not to bring homicide charges against police officers involved in the fatal shooting of Breonna Taylor, in Louisville, Kentucky September 26, 2020. REUTERS/Eduardo Munoz

(Reuters) - Kentucky's attorney general reversed course and said he would release on Wednesday a recording of grand jury proceedings over the police shooting death of Breonna Taylor that resulted in none of the officers involved being charged with homicide.

Attorney General Daniel Cameron initially rejected calls to release the grand jury proceedings, saying those are meant to be kept secret. The outcome of the deliberations over the March shooting of the Black emergency medical technician raised questions over how Cameron, a Black Republican, guided the grand jurors in their decision-making.

The Kentucky governor, the Louisville mayor and the Taylor family all had pressured Cameron to make the grand jury evidence public. The tipping point came after one of the grand jurors and a Jefferson County Circuit Court judge also said the proceedings should be released.

"The grand jury is meant to be a secretive body. It's apparent that the public interest in this case isn't going to allow that to happen," Cameron said in a statement late on Monday. "We will comply with the judge's order to release the recording on Wednesday."

The shooting took place while police were executing a "no-knock" search warrant in a drug investigation involving Taylor's ex-boyfriend. When the officers burst into her home in the early morning hours of March 13, Taylor's new boyfriend fired one shot at what he said he believed was a criminal intrusion, wounding one officer, and three officers responded with 32 rounds, six of which hit Taylor.

The grand jury decided against charging either of the two officers whose bullets struck Taylor, but did indict a third officer with wanton endangerment for stray bullets that hit a neighboring apartment.

Cameron last week called the police shooting justified as an act of self-defense. In a crucial piece of disputed evidence, he also said one witness heard police announce themselves before breaking in.

The Taylor family attorneys and others have criticized Cameron's handling of the case, questioning what evidence he might have offered to the grand jury and asking if he meant to protect to the police.

Cameron said he presented "all of the evidence."

In the U.S. justice system, prosecutors present findings in secret to a panel known as a grand jury that must decide if the evidence is sufficient to charge a suspect. Since there are no presentations by attorneys for the suspect, the system gives prosecutors wide leeway in guiding the grand jury.

An unidentified grand juror filed a court motion on Monday asking to make the details public, apparently challenging Cameron's public statements about how the panel decided to clear the officers.

"The full story and absolute truth of how this matter was handled from beginning to end is now an issue of great public interest and has become a large part of the discussion of public trust throughout the country," the motion said.

Separately, the judge overseeing the case of the one officer who was charged on Monday ordered that the grand jury evidence be entered into the court file by Wednesday, instead of just being shared between the prosecution and defense lawyers.

Cameron's statement said his office believes a release of the grand jury evidence "could compromise the ongoing federal investigation and could have unintended consequences such as poisoning the jury pool," but that despite these concerns he will comply with the judge's order.

He also said the public release would address the questions raised by the anonymous grand juror.

"We have no concerns with grand jurors sharing their thoughts on our presentation because we are confident in the case we presented," Cameron said.