LIMA (Reuters) - Peruvian police have seized a shipment of about 11 tonnes of mutilated sharks in the country's north, mainly of protected hammerhead sharks whose fins are highly valued and seen as a delicacy in Asian markets.

The shark meat was found in cold storage in the city of Tumbes, bordering Ecuador, after an operation this week with the environmental prosecutor's office, the state customs and tax body said.

China and Japan are the largest consumers of shark products, including the fins that are consumed in soup and are believed to have aphrodisiac properties.

"Sharks are a protected species and that is why we have intervened," the head of customs control, José Ordóñez Torres, told Reuters TV.

Authorities said the species seized included the hammerhead, fox and diamond shark, which according to international conventions are protected species.

According to Peru's Organization for Research and Conservation of Aquatic Animals (ORCA), shark fin is gaining new consumers and the profit from its trade attract traffickers because it can gain high prices in international markets.

"On the black market the approximate price of shark fins is between $400 and $900 (U.S.) per kilo," said Carlos Yaipen, president of ORCA.

"Shark fin is mainly sold in Asian countries such as China, in Indonesia and in the Indian market. It is highly sought-after because it is exotic." 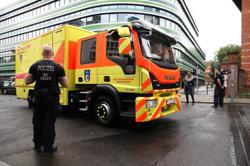