BERLIN, Sept. 16 (Xinhua) -- Several German police officers are suspected to have been involved in at least five far-right online chat groups, Herbert Reul, minister of the interior of the German federal state of North Rhine-Westphalia (NRW), said at a press conference on Wednesday.

Almost 30 officers are accused of "sending and receiving right-wing extremist propaganda in at least five private WhatsApp chat groups, which were apparently used exclusively or predominantly by police officers," said Reul, calling it a "disgrace for the NRW police."

One of the chat groups is believed to have been established in 2013. Photos of Adolf Hitler and a "fictional description" of a refugee in a gas chamber were also shared in the chat groups, Reul noted.

All accused police officers were suspended on Wednesday and disciplinary measures were taken against them.

A special internal commission has been set up to investigate the case and numerous searches across 34 police stations and private homes in the federal state of NRW have taken place since the early morning hours of Wednesday, according to Reul. 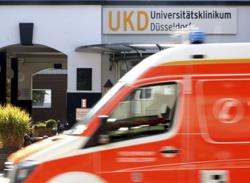