BERLIN (Reuters) - British Prime Minister Boris Johnson's plan to breach the Brexit treaty breaks Britain's tradition of upholding the rule of law and pushes it into "the ranks of despots", an ally of German Chancellor Angela Merkel said on Tuesday.

Senior conservative lawmaker Detlef Seif said the British plan to pass legislation that breaks its divorce treaty with the European Union, in a breach of international law, undermined Britain's credibility as a negotiating partner.

"The United Kingdom was for me, in the past, always a state that upheld the rule of law and with which one could negotiate," Seif, who is Brexit rapporteur for the CDU/CSU Bundestag group of Merkel's conservatives, told Reuters.

"But with this behaviour, Britain is joining the ranks of despots and regimes like those in Russia, Turkey, China and North Korea. I don't think Britain wants to be included in that group, but it has earned that classification."

The British government said explicitly last week that it plans to break international law by breaching parts of the Withdrawal Agreement treaty that it signed in January, when it formally left the EU.

Johnson lashed out at the EU on Monday as he won initial approval for the plan to breach the Brexit treaty, saying the move was needed because the bloc had refused to take a "revolver off the table" in trade talks.

Johnson said it was essential to counter "absurd" threats from Brussels including that London put up trade barriers between Britain and Northern Ireland, which is a part of the United Kingdom.

The EU says Johnson's bill would wreck trade talks and propel the United Kingdom towards a messy, no-deal Brexit.

Describing the British government's plan as "the worst thing in the whole (Brexit) saga", Seif asked: "Do I agree a treaty with someone if I don't know whether he will stick to it?" 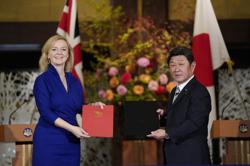