Crocodiles rest in their enclosure at the Madras Crocodile Bank, closed due to the outbreak of coronavirus disease (COVID-19), in Mahabalipuram, India, August 3, 2020. REUTERS/P. Ravikumar

CHENNAI (Reuters) - India's largest crocodile park may have as little as four months before it runs out of funds to feed animals, pay staff and do research, as ticket revenue shrinks after coronavirus lockdowns choked the flow of visitors, park officials said.

Annual sales of about 5 million tickets usually make up roughly half the revenue of the park, located about 40 km (25 miles) from the southern city of Chennai, but it has been shut since March 16, with no prospect of reopening in sight.

The lockdowns during the summer vacation season have cost an estimated 14 million rupees ($187,000) as visitors dropped by almost 2.5 million, said Allwin Jesudasan, the director of the Madras Crocodile Bank.

"Our present funding situation will allow us to stay functional for another three or four months," he told Reuters.

Started in 1976 by American-born snake expert Romulus Whitaker, who has also won recognition for his conservation work, the park is spread over 8.5 acres (3.44 hectares).

It is home to more than 2,000 crocodiles and alligators, as well as reptiles such as turtles, tortoises, lizards and snakes.

"Our senior staff have taken a voluntary 10% to 50% pay cut on their salaries and we have cut down our activities to just the critical ones," the park said in an appeal for funds on its website.

But the future of its staff and animals was not immediately clear after funds are exhausted.

The Madras Crocodile Bank Trust and Centre for Herpetology, which has bred more than 5,000 crocodiles during its existence, houses 14 of 23 existing crocodile species, three of them endangered.

Chennai trump Mumbai as IPL gets underway in UAE 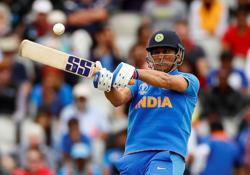 'Fit and Fresh' Dhoni ready to lead Chennai in IPL