MOSCOW (Reuters) - A Russian state virology institute has started human trials of the country's second potential COVID-19 vaccine, injecting the first of five volunteers with a dose on July 27, the RIA news agency reported on Tuesday.

The individual was feeling fine, the agency reported.

The next volunteer in the trial by the Vector virology institute in Siberia would receive an injection on July 30, RIA cited consumer safety watchdog Rospotrebnadzor as saying.

A government register of all clinical trials shows that the institute, which is overseen by Rospotrebnadzor, is testing a peptide vaccine using a platform first developed for Ebola.

The trial is then expected to scale up to 100 volunteers between the ages of 18 and 60, the clinical trials register shows. Vector is working on six different potential COVID-19 vaccines, World Health Organisation (WHO) records show.

A separate state research facility in Moscow, the Gamaleya Institute, completed early human trials of an adenovirus-based vaccine earlier this month and expects to enter large-scale trials in August.

More than 100 possible vaccines are being developed around the world to try to stop the coronavirus pandemic. At least four are in final Phase III human trials, according to WHO data - including three developed in China and another in Britain. 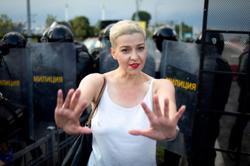