A state taxi employee collects money from passengers before its departure, amid concerns about the spread of the coronavirus disease (COVID-19), in Havana, Cuba, July 3 2020. REUTERS/Alexandre Meneghini

HAVANA (Reuters) - The Cuban capital stirred to life on Friday after more than three months of lockdown but there were no signs of tourists on Havana's quiet streets while residents fretted over shortages of food and other basic goods.

The city of 2.2 million people on the Caribbean coast is the last of Cuba's provinces to enter phase one of a three phase process to a new normal. All but one other province began phase two on Friday.

Havana's residents were able once again to use public transportation and private taxis, go to the beach and other outdoor recreation centers, and enjoy the city's famed Malecon seafront drive.

Cuba closed its airports in March and, while some hotels are open at resorts on isolated islets, there is no indication when Havana and other cities might allow foreign visitors to return.

"It is like breathing little by little the clean air we have missed," said veterinarian Norma Hernandez, who rents a room to tourists to make ends meet. "From the economic point of view the pandemic has been terrible for me, but I hope everything will return to normal."

For months, the once bustling capital seemed haunted with little traffic and no night life. Gloomy residents trudged in search of supplies, often waiting for hours to purchase them.

Now they can dine out and have drinks, although social distancing and wearing masks remain mandatory. Optional medical and other services resumed.

Food service worker Yajaira Pulido said she was thrilled to be jogging along the Malecon.

"I am very happy because now you can go to the beach, and take the kids out, with caution," she said.

Only a handful of COVID-19 cases have been reported this month, all but a few contacts of previously confirmed cases in Havana. Most of the island, home to 11.2 million inhabitants, has been free of the disease for more than a month.

Each phase of the reopening allows capacity at venues to increase from an initial 50%. Interprovincial transport begins during phase two, while schools open in September.

"There is no contradiction between public health and opening the economy. You can't accomplish the second without the first," President Miguel Diaz-Canel said recently.

Moraima Cabrera Delgado, owner of the Bom Apetíte Restaurant, which caters to tourists and locals, said she was preparing to open. Safety measures included a quick test for staff and an electronic menu.

"Now we will have problems with supplies. Almost all of us with businesses agree. We will adapt what we have to offer with what there is and hope things improve," she said.

That may take time. Communist authorities have warned the Caribbean faces a near 10% drop in economic activity and years of crisis. More so Cuba, they say, due to U.S. sanctions.

Cuba was failing to pay restructured debts and suppliers before the pandemic slashed tourism and other foreign exchange earners, due to harsher U.S. sanctions and the economic woes of socialist ally Venezuela.

Cuba's inefficient Soviet-style economy imports two-thirds of its food, half its fuel, and raw materials for just about everything else. Shortages ranging from food and fuel to personal hygiene products, medicine and agriculture inputs appeared a year ago and have become chronic.

"It is going to get worse. It is already really difficult with food," said one senior manager of Havana's state-run restaurants, requesting anonymity. 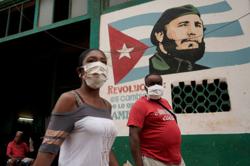 Havana back on lockdown as coronavirus rebounds COVID-19 outbreak in Cuba may be "uncontrollable," warns health minister