Brazil has the world's second largest outbreak after the United States and the virus has killed over 60,000 people in the country.

In Rio de Janeiro, crowds gathered to drink on the sidewalk of an upscale beach-side neighborhood on Thursday night, the first evening bars in the city were allowed to reopen.

Pictures of the revelry in Leblon, where few were wearing face masks and people were huddled close together, went viral on social media drawing condemnation and concern.

"A tragedy foretold," David Miranda, a federal congressman for Rio, wrote on Twitter above a picture of the crowded sidewalk. He criticized the city's mayor Marcelo Crivella.

"Crivella's decision to throw open the doors of business will come with a high cost," he added.

Crivella's office did not immediately respond to a request for comment.

In Rio alone, more than 6,600 people have died of COVID-19 in the past four months. Only 14 countries in the world have a death toll higher than the city. Intensive care units in public hospitals are at 70% capacity.

President Jair Bolsonaro has been widely criticized by health experts for downplaying the severity of the virus which he has dismissed as just "a little flu." Bolsonaro has pressured governors and mayors for months to reverse lockdown measures and reopen the economy.

On Friday, Bolsonaro vetoed parts of a law that would have made wearing a face mask obligatory in enclosed spaces where large groups gather - such as churches and schools.

Bolsonaro has regularly flouted social distancing guidelines advised by most health experts, shaking hands and embracing supporters. He has said publicly that his past as an athlete makes him immune to the worst symptoms of the virus. 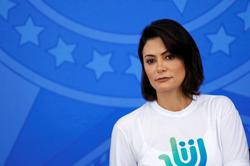