Thousands of Greeks protest against bill to regulate demonstrations

Members of the Greek Communist Party (KKE) take part in a demonstration against government plans to regulate street protests, in front of the parliament building in Athens, Greece, July 2, 2020. REUTERS/Alkis Konstantinidis

ATHENS (Reuters) - Thousands of Greek protesters rallied in central Athens on Thursday against government plans to regulate frequent street demonstrations which often cause disruption in the city.

Street protests are the main form of opposition against government policies in Greece, a country still recovering from a deep socioeconomic crisis that erupted in late 2009 and led to three international bailouts on tough austerity terms.

As many as 3,500 members and supporters of Greece's communist party gathered in central Syntagma square to protest legislation now pending in parliament and which is expected to be put to the vote next week.

Demonstrators held banners calling for the bill to be withdrawn, and others calling it an 'abomination'.

The bill mandates the appointment of a rally organiser who will liaise with police and imposes restrictions on a demonstration if the number of participants is low. It also imposes penalties on people displaying violent behaviour, holding organisers legally responsible for any harm or damage caused by protesters.

"The aim of the bill is to put an end to the chaos created," government spokesman Stelios Petsas told reporters earlier on Thursday, adding that there were 80 rallies in Athens in May. 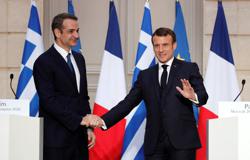 Amid tensions with Turkey, Greece in joint manoeuvres with France 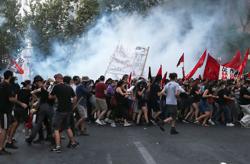