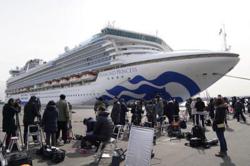 MELBOURNE (Reuters) - A former passenger on the Diamond Princess cruise ship that was quarantined off Japan for coronavirus died in a hospital in Perth early on Sunday, a health official said, becoming Australia's first death from the virus.

The 78-year-old man had been in quarantine since being evacuated from the cruise ship off Yokohama, one of more than 150 Australians taken off the vessel.

"Our condolences are with his family and unfortunately he's the first death we've had from coronavirus in Australia," Andrew Robertson, the chief health officer of Western Australia state, told journalists.

The man's widow also caught the virus, but is in stable condition, the health official said. Australia's tally of virus infections rose by one to 26 on Sunday, the latest government figures showed.

Prime Minister Scott Morrison said in a tweet that he was saddened to hear of the man's passing and the government would continue to do what it could to protect Australians from coronavirus.

"We are monitoring and responding to the information we are receiving every day," Morrison tweeted. "We are not immune, but we are as prepared as any country can be and we will get through this."

On Saturday, Australia said it would deny entry to all foreigners travelling from Iran because of the spreading virus in the Islamic republic.

There have been more than 85,000 virus infections worldwide, the majority in China, the World Health Organization said. Outside China, it has spread to 53 countries, with more than 6,000 cases and 86 deaths.

(Reporting by Will Ziebell; Editing Clarence Fernandez and Kenneth Maxwell)