The rebel withdrawal from Goma on Lake Kivu, a strategic hub in the country's war-scarred eastern borderlands, was agreed in a deal brokered by presidents of the Great Lakes states under Uganda's leadership a week ago.

Goma's fall on November 20 to the Tutsi-led M23 rebel movement which routed United Nations-backed government forces triggered a diplomatic scramble to prevent a wider escalation of the eight-month-old rebellion in the conflict-prone region.

The rebels had said they would fight to topple Congo's President Joseph Kabila and march on the capital Kinshasa, 1,600 km (1,000 miles) to the west. U.N. experts accuse Rwanda and Uganda of supporting the revolt, a charge both strongly deny.

In the centre of Goma, blue-helmeted U.N. peacekeepers from Uruguay in white armoured vehicles watched as camouflage-clad M23 fighters scrambled on to the back of flatbed trucks with battered suitcases and other belongings before driving off.

Residents lined the streets leading out of the city to watch as the truckloads of singing rebels drove out, heading for previously agreed positions 20 km (13 miles) north of Goma from where M23 launched its lightning offensive two weeks ago.

On the dusty road by the U.N.-controlled airport, about 100 rebels trudged out of town on foot. Some of the trucks leaving Goma carried crates of captured munitions and military supplies.

Makenga, who faces a U.N.-imposed assets freeze and travel ban for leading the revolt, said the M23 withdrawal was in response to a request from Ugandan President Yoweri Museveni.

"We are leaving for peace," Makenga said, following a brief ceremony in which a squad of around 40 M23 fighters, wearing mottled green camouflage uniforms, peaked caps and black gumboots, first paraded and then sang and danced.

If there are no hitches, a full rebel withdrawal from lakeside Goma, which lies in sight of the towering Mount Nyiragongo volcano, will provide breathing space for possible follow-up negotiations between the rebels and Kabila.

Humanitarian agencies say hundreds of people have been injured and thousands displaced by the recent fighting.

The Congolese president has said he is willing to listen to the rebels' grievances, but there is considerable mistrust between the two sides and Kabila faces pressure from within his own army to pursue a military solution rather than talks.

Uganda's junior foreign minister, Asuman Kiyingi, told Reuters Kampala would encourage the two sides to talk. "Now that M23 has withdrawn, it's important that the Kinshasa government also addresses the grievances of these people (M23)," he said

Goma lies at the heart of Congo's eastern borderlands which have suffered nearly two decades of conflict stoked by long-standing ethnic and political enmities and fighting over the region's rich resources of gold, tin, tungsten and coltan. The latter is a precious metal used to make mobile phones.

Some Goma residents jeered as the trucks carrying the departing rebels lurched through the dusty streets. Some of the vehicles stopped to fill up with petrol, while others were held up temporarily by teeming traffic.

A military observer from Rwanda, one of several defence representatives from neighbouring states who watched the withdrawal, said it was going ahead without problems.

"It is all very smooth," he said, asking not to be named.

On Friday, the pullback plan appeared to run into problems, including a dispute over abandoned army supplies the insurgents wanted to take with them.

But this incident did not appear to impede the pullout, which U.N. officials expected would be completed on Saturday.

Congolese policemen who had been brought in to help keep order as the rebels left were also visible in the streets.

In the face of evidence supplied by U.N. experts about Rwandan involvement in the rebellion, a number of Western donors have frozen aid to Kigali. Rwandan President Paul Kagame has angrily rejected the charges against his government.

Rwanda has twice invaded its western neighbour Congo over the past two decades, at one point sparking a conflict dubbed "Africa's World War" that drew in several countries.

It has justified its interventions by arguing it was forced to act against hostile Rwandan Hutu fighters who fled to Congo after the 1994 Rwandan genocide that saw 800,000 Tutsis and moderate Hutus killed by Hutu soldiers and militia.

The M23 rebels said they took up arms over what they cited as the government's failure to respect a March 23, 2009, peace agreement that envisaged their integration into the army.

They have since broadened the scope of their movement, which takes its name from the peace deal date, declaring their aim to "liberate" the entire Central African nation and oust Kabila.

Aid agencies say more than 5 million people have died from conflict, hunger or disease in Congo since 1998. 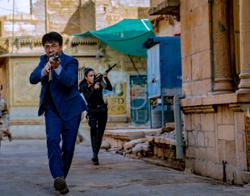