BEIJING (Reuters) - French President Nicolas Sarkozy drew an angry protest from China on Sunday for meeting the Dalai Lama, with Beijing warning of broader damage to relations with the European Union.

The two met on Saturday, five days after China called off a summit with the EU in protest against Sarkozy's plan to meet the Tibetan spiritual leader, branded by Beijing a "splittist" for advocating self-determination for his mountain homeland.

In the first official reaction since the meeting, Beijing said it had summoned the French ambassador to China, Herve Ladsous, to issue a sharp rebuke.

"We urge the French side to prioritise bilateral relations and interests of the two peoples, to ... fully understand the damage generated from the meeting between Sarkozy and the Dalai Lama on bilateral relations as well as Sino-EU relations," Vice Foreign Minister He Yafei said on state-run CCTV.

France, which holds the rotating presidency of the 27-nation bloc, said the reaction of the Chinese was unwarranted.

"They should accept this situation. The Dalai Lama is not a dangerous man. He is a man of peace, a man of non-violence who was awarded the Nobel peace prize," France's junior minister for human rights Rama Yade told LCI television and RTL radio.

The West is pushing for closer Chinese co-operation, especially in the areas of trade and currency, to limit damage from a worldwide economic crisis. Beijing, in turn, views Europe as a major market for its goods, which it sees threatened by further tariffs or restrictions.

Some French commentators criticised Sarkozy for what they called his inconsistency over China and human rights.

"They are only punishing the numerous about-turns in our policy," Jean-Luc Domenach, a researcher on China at Sciences-Po university, told the Journal du Dimanche newspaper, which is usually supportive of Sarkozy.

"Since the Tibetan riots in March, Sarkozy has changed his attitude towards Beijing several times. First he was very pro-Chinese, then he took a harder line before returning to a position in the middle," Domenach added.

Sarkozy campaigned on a promise to put human rights at the centre of his foreign policy, saying he opposed lifting an EU arms embargo on China that was imposed after Beijing's 1989 crackdown on pro-democracy protesters killed hundreds.

Shortly after taking office, he reversed his position on the arms embargo and went on a visit to China during which French companies sealed some $30 billion worth of business deals.

Following the deadly riots in Tibet, Sarkozy said he might not attend the opening ceremony of the Beijing Olympics, depending on China's handling of the situation in Tibet. It was not until July that he said he would go.

TOO LITTLE, TOO LATE?

An official in Sarkozy's office told reporters last week he had seen no sign of any Chinese boycott of French products, adding that the EU and China were mutually dependent.

"We have all got each other by the beard," he said, adding that Carrefour employed tens of thousands of people in China and was the biggest French purchaser of Chinese goods.

Domenach said China might suspend some firms' contracts. There could also be political fallout at home. To many French observers, Sarkozy's half-hour encounter with the Dalai Lama was too little, too late.

"Funny place for a meeting," said the wide-circulation daily Le Parisien in its Sunday edition, referring to the meeting in Gdansk on the fringes of 25th anniversary celebrations of Polish pro-democracy leader Lech Walesa's Nobel Peace Prize.

"It is in Gdansk ... 1,500 km from Paris that Nicolas Sarkozy finally met the Dalai Lama yesterday," it added.

A cartoon in satirical newspaper Le Canard Enchaine showed Sarkozy arriving at a car park in dark glasses. An aide says: "He's waiting for you on the sixth floor below ground, in a Lada with tinted windows." Sarkozy replies: "He could have been a little more discreet!" 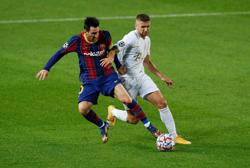