U.N. aide in Kosovo convicted of sex abuse of minor

UNITED NATIONS (Reuters) - A court in Serbia's U.N.-governed Kosovo province sentenced a U.N. official to three years in prison after finding him guilty of sexual abuse of a minor, the United Nations said on Tuesday.

Rashidoon Khan of Pakistan, an official of the U.N. refugee agency UNHCR, was also convicted on one count of falsifying official documents after he used U.N. stationery to report his travel documents as lost, so he could obtain duplicates after the court seized them, U.N. officials said.

At the same time, a juvenile co-defendant, a female Kosovo Albanian, was found guilty of two counts of facilitating prostitution and was sentenced to two years in a youth prison.

The events in question took place between September and December 2004, the officials said, adding that both defendants intended to appeal the judgment.

The ruling demonstrates both the zero-tolerance policy of the United Nations on sexual abuse and the independence of Kosovo's judiciary, U.N. chief spokesman Stephane Dujarric said.

The ruling was issued by a district court in Pristina, Kosovo's capital. The court panel included an international judge and two from Kosovo.

The United Nations has administered Kosovo since 1999 after a NATO bombing campaign to halt Serb repression of ethnic Albanians, who make up about 90 percent of the province's population.

The United Nations has been hard-hit in recent years by allegations of sexual misconduct by U.N. peacekeepers and civilian staff. Rape, pedophilia and enticing children with food or money in exchange for sex have been among the abuses. 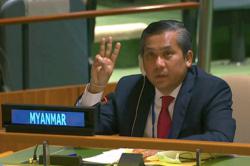