NEW ORLEANS (Reuters) - New Orleans police will force Hurricane Katrina's survivors to leave the city drowning in toxic waters on Wednesday, as the political storm grows over relief efforts for a disaster with a death toll feared to be in the thousands and a price tag that could hit $150 billion.

After days of trying to change the minds of some 10,000 people who have refused to leave the flooded metropolis since Katrina battered the U.S. Gulf Coast last week, authorities began to enforce a mandatory evacuation on Tuesday.

City Mayor Ray Nagin said floodwaters filthy with garbage, oil and putrefying bodies will spread disease and people must go. Police Superintendent P. Edwin Compass said his men would evacuate residents, if necessary against their will.

"We'll do everything it takes to make this city safe. These people don't understand they're putting themselves in harm's way," Compass said.

But die-hard inhabitants of a city mainly known for jazz and Mardi Gras before it became a disaster area of Third-World proportions say they fear evacuation to parts of the country where they have no family or means of support.

Martha Smith-Aguillard, 72, said she was brought against her will to an evacuation point at the city's wrecked convention center.

Aguillard's foot was swollen after she trod on a rusty nail and she said she needed a tetanus shot. Nonetheless, she refused to board a government helicopter.

"They manhandled me and paid no mind to what I said. I ain't never been in no helicopter in my life, or no airplane, and I'm 72, I ain't starting now," she said.

"I'm not going to get that tetanus shot, so I guess I'll just have to die," she said, adding, "We're all going to die and if I'm going to die, it's gonna be right here in New Orleans."

Meanwhile, a storm grew over responsibility for delays and disorganization in the relief response after the long-predicted storm punctured barriers protecting New Orleans, built below sea level, from an adjacent lake.

U.S. President George W. Bush said he would lead an investigation into the emergency operation, but he resisted demands for an immediate probe.

"There will be ample time for people to figure out what went right, and what went wrong. What I'm interested (in) is helping save lives," he said.

Bush's response to the crisis was rated "bad" or "terrible" by 42 percent of Americans surveyed for a CNN/USA Today Gallup poll released on Wednesday, compared with 35 percent who said it was "good" or "great." The federal government's performance received the same ratings, while the response of state and local officials was viewed negatively by 35 percent and positively by 37 percent.

Asked who was to blame for the problems in New Orleans, 13 percent of the 609 adults surveyed said Bush, 18 percent said federal agencies, 25 percent said state or local officials and 38 percent said no one.

Members of Bush's Republican Party criticized relief efforts in the disaster, with a death toll Nagin has said could reach 10,000.

"If our system did such a poor job when there was no enemy, how would the federal, state and local governments have coped with a terrorist attack that provided no advance warning and that was intent on causing as much death and destruction as possible?" said Sen. Susan Collins, a Maine Republican who will lead an investigation by the Senate Homeland Security Committee.

Senate Democratic Leader Harry Reid of Nevada backed calls for a commission, like one that examined the Sept. 11, 2001, attacks, to problems of the hurricane response.

The Washington Post reported on Wednesday the U.S. Coast Guard's chief of staff, Vice Admiral Thad W. Allen, had been picked by Homeland Security Secretary Michael Chertoff to essentially lead the federal recovery efforts in New Orleans. He has been assigned to be Brown's deputy and take over control of search-and-rescue and recovery operations.

The White House is preparing a new emergency budget request likely to total $40 billion to $50 billion for the recovery, Reid said after meeting with Bush and White House budget director Josh Bolten. The money would supplement $10.5 billion approved by Congress last week.

But Katrina's cost was expected to exceed those initial requests. Reid said the cost of recovery and relief could be more than $150 billion.

While some Republicans disputed that figure, Senate Budget Committee Chairman Judd Gregg said, "I don't find that crazy at all." The New Hampshire Republican was quoted in the Wall Street Journal as saying, "That's a reasonable estimate from what we know so far."

He said the cost to the federal government could reach $200 billion.

Louisiana's insurance commissioner was to hold an emergency meeting in Atlanta on Wednesday to discuss storm-related insurance issues with consultants, and industry and government representatives, the New Orleans Times-Picayune reported.

After the days of delays, aid efforts have picked up. Water was being pumped from flooded streets after the U.S. Army Corps of Engineers used rocks and sandbags to plug breached levees.

Flood levels in some areas were said to have dropped 30 cm. Nagin said 60 percent of New Orleans was now under water, down from 80 percent last week.

But it will still take weeks to dry the city out, and rescue teams expect to find thousands of bodies inside homes swallowed in the flood. Huge fires at buildings around the city hampered rescue efforts on Tuesday.

The challenges ahead are huge. State officials said 140,000 to 160,000 homes were flooded and will not be recovered, and it would take years to restore water service to all of the city.

More than a million people may have been driven from their homes -- many perhaps permanently -- with hundreds of thousands taking refuge across the United States.

The CNN/USA Today poll said 63 percent of Americans surveyed believed the New Orleans should be rebuilt. 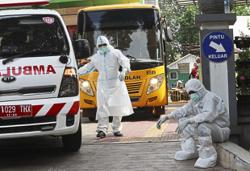