Singapore in a good position to do mass Covid-19 testing, say experts

SINGAPORE (The Straits Times/ANN): Singapore has the capability to do tens of thousands of Covid-19 tests daily, industry players said, noting that increased testing could be a key enabler for the country as it looks to gradually lift the circuit breaker measures.

"We are in a good position to do mass testing," Dr Ong Siew Hwa, director and chief scientist of home-grown biotech firm Acumen Research Laboratories (ARL), told The Straits Times.

Currently, the country can do more than 8,000 polymerase chain reaction (PCR) tests a day, up from 2,900 at the start of this month.

But if circuit breaker measures are to be loosened, testing must be scaled up substantially, so that any new cases can be detected quickly. And until a vaccine is found, testing will have to be done regularly, experts said.

PCR tests detect genetic material of the coronavirus from a sample and can tell if a person is currently infected.

A handful of companies here are capable of producing such tests, and the authorities have started getting in touch with them.

ARL, whose core focus is infectious disease diagnostics, developed and manufactured its Covid-19 diagnostic test kits from scratch in January and is now able to run up to 20,000 tests a day.

The company has developed three types of test kits. The latest two types, which test for relatively stable genes in the virus that are less likely to mutate, separately received provisional authorisation from the Health Sciences Authority in March and early this month.

ARL has been producing and selling these kits to countries in the region since last month. But as the domestic Covid-19 situation intensified, attention has been turned inwards.

The firm is now working towards analysing patient samples in the laboratory as well.

Collaboration among different private and public institutions can help with prohibitive overheads when it comes to growing Singapore's testing capabilities, said Dr Ong.

Some firms can provide equipment and expertise, and others manpower and funding support.

"Some smaller companies, like us, have the expertise but may not have the financial resources and strong infrastructure of large healthcare groups to scale up production and testing capabilities.

"Hence, there needs to be a marriage between these two types of companies to allow for large-scale testing," she said.

She also stressed that reagents, the chemicals needed for analysis, should be produced locally, as global shortages would happen in times of crisis.

"There remains a need for us to be more self-sufficient in this aspect. This, as well as the production of masks, may not be the most profitable business during peacetime.

"But moving forward, people should explore new business models and possible policy changes so that businesses which are traditionally unprofitable during peacetime can survive, allowing us to be more prepared for future pandemics," Dr Ong said.

"We hope to be able to contribute to this national effort -- to let the science, data and technology guide our decision-making."

Professor Edison Liu, a veteran in the health and biomedical sciences scene who played a key role during the severe acute respiratory syndrome (Sars) outbreak here in 2003, is also upbeat about Singapore's capabilities, praising the country as one of the most advanced and organised in the world in its pandemic response.

He headed the Genome Institute of Singapore then and led its efforts to sequence the Sars virus and develop diagnostic tests.

"I am honoured to have had a role in shaping (Singapore's) strategic approach to pandemics in the past and know full well Singapore's capabilities. Singapore's small size and compact geography also is an advantage," he said.

Now based in the United States, he has likewise built up Covid-19 testing capabilities from scratch. He heads the US-based The Jackson Laboratory, an independent non-profit biomedical research institution.

He added that "viral testing will be the most important tool in the control of the pandemic until a vaccine and antivirals can be developed". - The Straits Times/Asia News Network 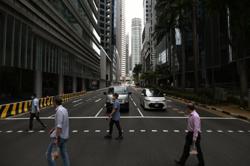