Alone and looking for cheap thrills amid pandemic

LIKE many others who are required to shelter in place during the Covid-19 pandemic, Fachri – not his real name – has been busy filling his spare time with an assortment of activities, from polishing his writing skills to playing video games, on top of doing the day-to-day work-related stuff.

But as the situation in Indonesia shows little progress in recovering, with more than 9,500 people officially infected by the disease as of Tuesday afternoon, the 28-year-old researcher felt a sense of frustration set in.

This frustration is further offset by the fact that Fachri lives alone in a kos-kosan (rooming house) in Jakarta.

The endless stream of information on Covid-19 that populates his news and social media feed and dominates discussions in his work and friendship circles has him feeling more mentally drained and lonelier as time passes.

To nip those feelings categorically in the bud, Fachri would usually resort to the cheap and instant gratification that comes from sexual self-stimulation activities.

“In this kind of situation, I feel like they are the easiest ways to cast away my frustrations, ” he said.

The unforeseen impact that the Covid-19 outbreak has had on his mental condition, Fachri believes, has affected so much of his sex life that getting pleasure out of online adult entertainment is no longer as fulfilling as it used to be.

“I am slowly getting bored from doing it all the time, ” he said.

Sex, as much as Indonesia’s largely conservative society tries to disregard, has offered solace for many people during this time of restricted physical and social interactions.

As such, the shelter-in-place orders set up as a form of physical distancing have unwittingly affected the sex lives of many people as the pandemic drags on.

AFP reported earlier this month that Malaysian contraception giant Karex had witnessed an increase in demand for its condoms. In India, the same report notes that sales of contraceptives rose between 25 to 35% in the week after the country announced its nationwide lockdown last month.

Sex psychologist Baby Jim Aditya said that experiencing social frustrations during the pandemic was a probable occurrence, as the uncertainty that arises from the current situation would be felt in every facet of people’s lives.

But the probability of sexual frustration is even greater among those who live on their own. — The Jakarta Post/ANN 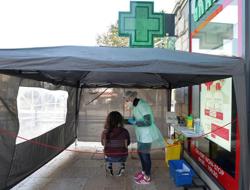