BANDAR SERI BEGAWAN (Xinhua): Brunei has announced that starting from Thursday, all foreign visitors arriving in Brunei must bear the cost of Covid-19 testings, which is at 1,000 Brunei dollars (US$700) per person.

According to Brunei's Ministry of Health on Thursday (April 16), the Brunei government will no longer bear the cost of Covid-19 testing for incoming foreign passengers and the costs of the 14-day isolation at designated government facilities will also be borne by foreigners entering Brunei, as announced earlier this month.

"Healthcare is not free, it is expensive," Brunei's Health Minister Dr Mohd Isham Jaafar said, adding that the government will continue to pay for the medical treatment bill of infected Covid-19 patients.

The minister also said mass gatherings will not be allowed during the upcoming month of Ramadan which starts next week although the Covid-19 outbreak is under control in the sultanate.

Brunei reported no new cases of Covid-19 on Thursday, marking the sixth day in a row without new cases since last Friday, when the first round of zero new cases reporting for five consecutive days was broken by one new positive patient.

The country's tally of cases stands at 136 since the first case was detected in the sultanate on March 9. At the same time, no more patients have recovered on Thursday and the total number of recovered cases remains at 108.

Meanwhile, Brunei received medical donations from China's Guangxi Zhuang Autonomous Region on Thursday, as a part of the bilateral cooperation in fighting the Covid-19 outbreak.

Yu Hong, the Chinese Ambassador to Brunei, transferred the medical supplies donated by Guangxi to Brunei's Minister at the Prime Minister's Office and Second Minister of Finance and Economy Mohd Amin Liew Abdullah.

In a letter to the Brunei minister, Chen Wu, chairman of the autonomous regional government, appreciated the assistance, encouragement and donations of medical supplies from the Brunei government and people when Guangxi was in critical moments combating the Covid-19 for the last two months.

"As Brunei is currently facing challenges of Covid-19 outbreak, the Guangxi government and its people feel empathy and would like to extend their support and make donations of medical supplies to Brunei," Chen said.

Mohd Amin thanked the government of Guangxi Zhuang Autonomous Region and China's central government for the medical cooperation and donations to Brunei and expressed the willingness to strengthen cooperation with Guangxi and continuously promote the cooperation in the building of the economic corridor.

"The mutual support between Guangxi and Brunei at the critical moment to fight the COVID-1 pandemic fully embodies the deep friendship between the two countries, and has further enriched the content in building the Brunei-Guangxi Economic Corridor," Yu Hong added. - Xinhua 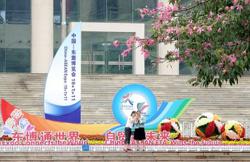