Singapore to give cash to households in third stimulus package worth S$5.1bil

The higher support for April is temporary, and the scheme will revert to normal levels beyond that. Singapore will provide direct cash to households and take steps to save jobs in a third stimulus package as the city state prepares to go into a partial lockdown on Tuesday (April 7) to contain a fast-spreading Covid-19 (coronavirus) outbreak in the country. - Strait Times/Asian News Network

SINGAPORE: Singapore will provide direct cash to households and take steps to save jobs in a third stimulus package as the city state prepares to go into a partial lockdown on Tuesday (April 7) to contain a fast-spreading Covid-19 (coronavirus) outbreak in the country.

On Monday, the supplementary budget which was announced was worth S$5.1bil (US$3.55bil) - in additional economic spending such as wage support, waiver of levies and one-off payments to combat the coronavirus pandemic.

"The primary aim of this solidarity budget is to take further steps to save jobs and protect the livelihoods of our people during this temporary period of heightened measures, ” Heng said.

Trade-reliant Singapore is reeling from the impact of the coronavirus outbreak, with the government predicting a 1%-4% contraction in the economy even before new restrictions on movement begin Tuesday, including the closure of schools and non-essential businesses.

An accelerating caseload over the past couple weeks -- now increasingly made up of local clusters rather than Singaporeans returning from overseas -- culminated in the country’s largest one-day total of confirmed cases Sunday, at 120.

Firms in all sectors will also have 75% of their local employees' wages subsidised for the month of April, said Heng.

They will also receive the first payout under the enhanced Jobs Support Scheme (JSS) this month, instead of next month (May), to help with cashflow, he told Parliament in announcing a third set of measures to save businesses and jobs from the fallout of the coronavirus pandemic.

The wage subsidy applies to the first S$4,600 of wages paid this month for each of the more than 1.9 million Singaporean and permanent resident employees.

The scheme - first announced during the Budget in February - was enhanced in the Supplementary Budget in March to provide a subsidy of 25% of the wages of all local employees, with higher subsidies of 50% for those in food services and 75% for those in tourism and aviation.

The payouts were to be in three tranches in May, July and October, with the monthly wage cap raised from S$3,600 to S$4,600.

The higher support for April is temporary, and the scheme will revert to normal levels beyond that.

Said Heng: "The aim of this strong support is to directly reduce firms' wage costs, to help them retain their workers. I expect firms to make use of this Jobs Support Scheme to continue paying your workers and refrain from putting workers on no-pay leave during this period, or worse, retrenching them," said DPM Heng.

"We will monitor the situation carefully together with our tripartite partners, and take action where needed."

The enhanced scheme was among additional measures he announced to help Singapore cope with the circuit breaker to stem the spread of Covid-19, which he termed the Solidarity Budget.

Mr Heng noted that many firms cannot operate at all, or can only operate at a much reduced level in the coming weeks due to the strict "circuit breaker" measures announced by Prime Minister Lee Hsien Loong last Friday (April 3).

Most workplaces apart from those providing essential services or in key economic sectors will be closed for about a month from Tuesday (April 7) in order to break the chain of transmission of Covid-19.

But firms should still retain and pay their workers, stressed Heng.

This will also enable them to resume operations quickly when the circuit breaker is lifted, he said. 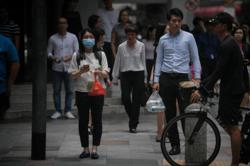 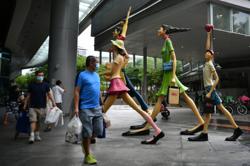 What\'s Your Status? 2h ago