Iranian women, members of paramilitary organisation Basij, making face masks and other protective items at a mosque in the capital Teheran, amid the coronavirus pandemic crisis. The trajectory of Covid-19 (coronavirus) infections in Iran appears to have started a "gradual" downward trend, the government said Monday (April 6), but it warned the disease is far from being under control. - AFP

TEHERAN: The trajectory of Covid-19 (coronavirus) infections in Iran appears to have started a "gradual" downward trend, the government said Monday (April 6), but it warned the disease is far from being under control.

Iran registered 2,274 new cases of infection over the same period, he said, putting the total number at 60,500 across the country.

The figure shows a drop in officially reported new cases of the novel coronavirus for the sixth consecutive day after a peak of 3,111 reached on March 31.

Iran is by far the country most affected by the pandemic in the Middle East, according to official tolls released by each state.

"Due to the intensification of the social distancing policy, we have seen a gradual and slow decline in the number of new cases in recent days," Jahanpour said.

President Hassan Rouhani reiterated a call for people to stay at home as he warned Iran could be "put back in a difficult situation" unless people follow guidelines.

"I hope that the strongest possible adherence to these instructions... will allow us to enter a phase of disease control and containment," Jahanpour said.

In an attempt to limit the spread of the disease, the authorities have not confined the population but have resorted to other restrictions such as closing most businesses deemed non-essential.

Rouhani announced on Sunday that the authorities had given the go-ahead for the resumption of certain economic activities "step by step" from April 11. - AFP
Article type: free
User access status: 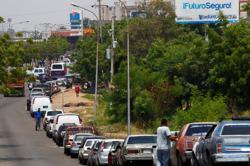