According to ship trackers, the Costa Fortuna has been making steady progress in the direction of Singapore since March 8, 2020. - Costa Cruises

SINGAPORE (The Straits Times/ANN): An Italian cruise ship rejected by Malaysia and Thailand over Covid-19 fears will dock in Singapore as scheduled on Tuesday (March 10), The Straits Times understands.

There are no plans to receive the vessel, which is carrying about 2,000 people, earlier.

The Maritime and Port Authority of Singapore and the Singapore Tourism Board said in a joint statement that the ship will be making a scheduled call.

"All of its passengers had embarked earlier from Singapore, and completed pre-embarkation checks based on prevailing policies for travel history and temperature screening as required by the cruise line and the terminal operator prior to boarding," said the two agencies, who added that the ship departed Singapore last Tuesday (March 3).

They added that the ship has declared on its Maritime Declaration of Health that none of its passengers currently on board are having a fever or have other symptoms of respiratory illness.

"The doctor on board the cruise ship will check on passengers and crew in order to ensure that they are healthy prior to disembarkation. All passengers entering Singapore are required to undergo temperature screening as a precautionary measure," the agencies added.

"Additionally, passengers entering Singapore and exhibiting fever and/or other symptoms of respiratory illness but who do not meet the Ministry of Health’s clinical definition may be required to undergo a Covid-19 swab test."

Passengers who are identified for Covid-19 swab testing but refuse to do so will not be allowed entry into Singapore.

The Costa Fortuna, on a 14-day voyage that started at Marina Bay Cruise Centre about two weeks ago, moved to sail to Singapore earlier than planned after it was stopped from entering the port at Penang.

According to ship trackers, it had been making steady progress in the direction of Singapore since Sunday.

By 7am on Monday, it was in the waters near Tuas but sailing in international waters.

According to the ship's itinerary, it departed Singapore on Feb 25 at 8pm. It then travelled eastwards of Singapore, towards Ko Samui and Laem Chabang in Thailand, before heading to Sihanoukville in Cambodia.

It returned to Singapore again last Tuesday, before sailing westwards and reaching Langkawi in Malaysia last Thursday. Following that, it was scheduled to stop at Phuket, Penang and Kelang, but was refused entry by both Thailand and Malaysia.

The Costa Fortuna is carrying about 64 Italians on board, according to Malaysian officials.

The ship was first turned away from the popular Thai holiday island of Phuket last Friday, despite there being no suspected virus cases aboard, according to its operator.

Thai authorities had imposed restrictions "on Italians that have transited in Italy in the last 14 days", Costa Cruises said on Twitter.

Last Saturday, the vessel tried to dock in Penang but was also refused entry. It then headed to Singapore, local politician Phee Boon Poh told AFP.

Malaysia has issued a blanket ban on all cruise ships coming into the country due to the increasing Covid-19 cases. The immediate ban took effect following instructions from the Health and Transport ministries.

According to its operator, the Costa Fortuna has 1,358 cabins in total.

Singapore is listed among the ship's home ports, which refers to a port where the vessel is based.

The Costa Fortuna's case has similarities with that of the Westerdam, a cruise ship that was at sea for two weeks and was rejected by five countries over fears its passengers could have the virus. Cambodia finally allowed it to dock on the country's southern coast on Feb 13.

Worldwide, the total number of people with Covid-19 has passed 100,000 while 3,500 have died across 95 nations and territories.

Italy has been hard hit by the virus with more than 300 fatalities, the most deaths from the disease of any country outside China, where the outbreak began in December.

A quarter of its population is now in lockdown, with the number of infections soaring past 7,000 in the country. - The Straits Times/Asia News Network 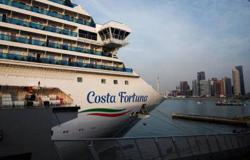 Passengers on Italian cruise ship get off in Singapore 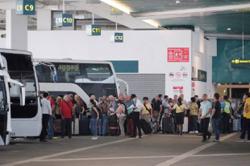